Rifugio Forcella Pordoi is a typical Alpine structure located on a pass at an elevation of 2848 m on the extensive Pordoi mountain.

Don’t miss the opportunity to go as far as Rifugio Boè. The walk that connects the two mountain huts takes place in a “grand” mountain environment.

2) Choose a route that is suitable for your skill level

5) Heading out on your own is more risky

7) Do not hesitate to seek the support of a professional

10) In case of an accident, sound the alarm by calling the emergency number 112.

Please note that the practicability of the itineraries in a mountain environment is strictly linked to the contingent conditions and is therefore influenced by natural phenomena, environmental changes and weather conditions. For this reason, the information contained in this page may have changed. Before leaving for a tour, make sure the path you will approach is still accessible by contacting the owner of the mountain hut, the alpine guides or the visitor centres of the nature parks, the info offices of the local tourist board.

In the presence of snow, which is not infrequent in the beginning of the summer season, it is necessary to pay significant attention to the final section of the channel that leads to the Forcella. Here, the track develops on a significant slope, and several passages can become dangerous.

The walk that connects Passo pordoi to Rifugio Forcella Pordoi follows trail 627, which starts near the monument dedicated to Fausto Coppi, on the pass.

After an initial section made easier by the presence of steps, you walk on terrain that is almost flat, to the bottom of a scree, where the slope becomes quite steep.

You follow the trail that runs centrally, and you avoid following the numerous tracks that run towards the face, and are used by mountaineers to reach the beginning of climbing routes.

You follow the indications marked on boulders and, at about 2580 m asl, you pass a turn-off on your right that leads to the Cesare Piazzetta via ferrata.

In this way, you reach the last part of the trail, where you follow a typical winding path, which is clearly visible even from the valley, gaining elevation with a series of steep but regular hairpin bends.

In the presence of snow, which is frequent at the beginning of the season owing to the high elevation, it is necessary to pay significant attention to the final section of the channel leading to the Forcella since the trail is on a steep slope and several passages can become dangerous.

You return along the same route.

It is also possible to reach the mountain hut using the ski lift that starts at Passo Pordoi and climbs up to Sass Pordoi. From here, you follow the path down, descending in elevation by about 150 m, to Forcella Pordoi. 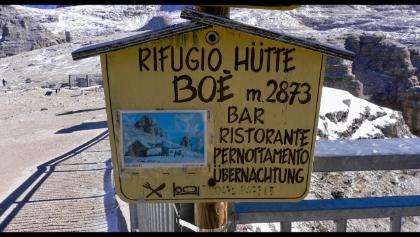 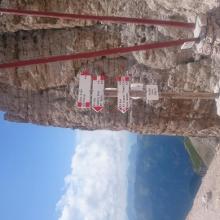 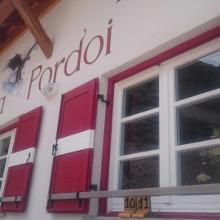 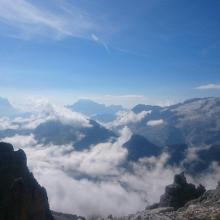